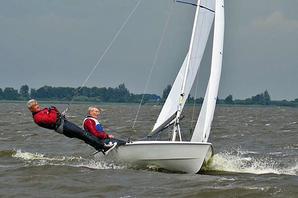 23-27 July 2016
The 2016 Javelin European Championship was held in Holland at Tjeukemeer, which is North East of the IJsselmeer, with 11 races over 4 days. Races were to be about 60 minutes duration, triangle and sausage in the initial, lighter winds, with an extra triangle for the stronger winds on the last day.

Racing on Sunday was postponed until after 3 pm, when a light, fitful, force two wind filled in. After 3 races with different winners, the Earl brothers were 1 point ahead of the Schlittenhards and Johannes Markert, crewed by Jorn Pietsch.

On Monday, the first two races were held in a force two to three, variable wind. In race one, the Earls led at the windward mark after a pin end start and gradually increased their lead from Markert and Christian Wirts & Barbara Bloch, with Malte Riesner & Sebastian Sigmund fourth. Race two was similar, but this time the Earls were chased hard by the 18 year old, Lars-Henrik Meyn & Volkmar Prehn. After Earl tacked on a shift on the last beat, Meyn carried on and established a small lead, which he kept to the finish. Riesner was third from the Schlittenhards. Race three was abandoned after one round, due to a timing issue, with the Earls holding a narrow lead. The rerun third race coincided with a sharp squall, when winds touched force 6 for a short time. The Schlittenhards excelled in these conditions, particularly under spinnaker. Riesner was also enjoying the extra wind, ahead of the Earls. Olav Kerssenmakers & Marten de Groot passed near the finish to get third. Earl now had a 4 point lead over the Schlittenhards.

Tuesday was back to light winds. In race one Wirts picked the correct route through the tricky calms and led from Earl and Riesner. Peter & Lennard van Zanten were fourth. In race two, Earl led on the triangle, but was unable to stop Markert from passing to record his second win, with Wirts third ahead of Schlittenhard. The third race was by far the most difficult, with calms that were unpredictable. The early leaders lost out badly on the first beat, when a new wind filled in from the left. With the order at the first mark shuffled and further flat spots, it was a very frustrating race for some, with big place changes throughout the fleet. Schlittenhard emerged ahead, but remarkably Earl recovered from second last on the first mark to a close second by the end, just ahead of Meyn, with Wirts further back. Earl now held a 9 point lead over Schlittenhard, only requiring a fifth, in one of the two remaining races, for the Championship.

The wind on Wednesday was about force 4 gusting up to 6 and a very long course was set. Riesner stormed the first race from Schlittenhard, but Earl claimed third, one second ahead of Kerssenmakers and thus won the European Championship with a race to spare. In the last race no one made the gybe mark under spinnaker, but most of the fleet enjoyed some fast, exciting sailing. Schlittenhard won the race from Riesner by a big margin with Earl third. It was a well run event, with a good mixture of light and stronger winds. We look forward to next year in Germany.